Hello & welcome to Happy Little Homemaker! I'm so glad that you stopped by! I would love for you to subscribe to my RSS Feed. You can also find me on Pinterest and Twitter. Thanks for visiting! 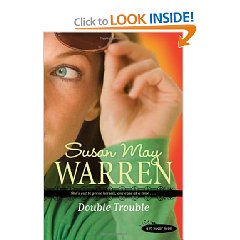 Double Trouble is the second in the PJ Sugar series by Susan May Warren.   PJ, after having solved a case in the first book in this series (which I have not read FYI), is ready to become a PI.   Or at least an assistant if she can convince her new boss she has what it takes.  When she takes on her first official case, she ends up house-sitting and impersonating a lady in the witness protection program.  It doesn’t take long for her to realize that someone is after her witness–and her!

I have to say that I just wasn’t terribly thrilled with this book.  I didn’t hate it, but I didn’t really like it that much either.   I spent days trying to figure out what specifically I didn’t like about it.   I guess the first thing is that PJ seems like a “spaz” to me.   Does that date me :)?   She’s just too flighty and doesn’t seem to be that complex a character.   Hopefully, she was much more developed in the first novel, but in this one, I like the secondary characters much more.   Especially all the people that come in due to er witness impersonation.

There is also this whole story line about this maybe budding love triangle between her high school sweetheart & her boss and I wasn’t buying any of it.  Again, maybe there was more in the first book, but in this one, I wasn’t 1/4 of the way through when I was thinking PJ just needed to give it up and blow off the sweetheart.   I didn’t know if PJ was into her boss but it was obvious she wasn’t into her HS sweetheart.

The last thing that irritated me was the sudden Christianity hidden at the end.  Usually when I read Christian fiction, it’s woven into the story from start to finish.  With this book, it’s almost as if the author forgot until the last 1/4 of the book, and said “oh yeah!  This is Christian lit.” and added some stuff that just didn’t flow very easily into the book.

The idea was good, but for me the mechanical things seemed to irritate me to the point that I couldn’t get past them.  Like I said, I hadn’t read the first one and maybe you learned a LOT more about PJ (and HER family & past) in that one.   Based on this book alone though, this book just didn’t do it for me.   If you’ve read the first one or would like to give it a try despite my not so glowing review, I do have one to giveaway.

To enter, just leave me a comment telling me either a different Susan May Warren book you would recommend OR your favorite Christian Fiction series.   Because I ALWAYS like to get recommendations from others.

For additional entries you can:

MY giveaway is open to US & Canadian shipping addresses only please and ends at midnight on 2/28/2010.   I will draw a winner Monday, 3/1 and you will have 48 hours to send me your mailing address or a new winner will be chosen.

There is also ANOTHER contest associated with this book.

Double Trouble, the brand new PJ Sugar novel by Susan May Warren, is in stores now! To celebrate the release, we’re running a HUMDINGER of a contest!!

One Grand Prize winner will receive a $150 SUPER SLEUTH prize package that includes:

* A brand new iPod Shuffle (perfect for those all-night stakeouts)

* A $10 iTunes gift card (we recommend the ALIAS soundtrack)

* A pair of designer sunglasses (be stealthy AND super chic)

* A gorgeous scarf from World Market (can also be used as a blindfold, and/or for tying up bad guys)

* AND signed copies of both Nothing But Trouble & Double Trouble. (romance! danger! intrigue! sooo much better than Surveillance for Dummies!)

Go now to enter!  Contest ends 2/20 and the winner will be announced on March 1st.

Thanks to LitFuse for providing the review and giveaway copies for this blog tour!

Welcome to my archives!


A Few of My Favorite Things!

Copyright 2005-2014 by Jen Steed. ALL RIGHTS RESERVED. Any use of materials on this Web site, including reproduction, modification, distribution or republication, without the prior written consent, is strictly prohibited.